Neurofibromatosis type-2 (NF-2) is a rare autosomal dominant hereditary disease caused by mutation of NF-2 gene on chromosome 22. Clinically it is characterized by presence of multiple CNS tumor types and is hence designated as central NF. Here we present a case of 20 year old male born of consainguous marriage who presented with multiple CNS tumors (vestibular schwannoma, meningioma, ependymoma and spinal neurofibroma) with juvenile posterior subcapsular cataract and café-au-lait spots. This case presents itself as a classic example of what has been described about NF-2.

The neurofibromatosis consists of at least two distinct dominantly inherited disorders, neurofibromatosis type 1 (NF-1) and neurofibromatosis type 2 (NF-2). For many years both these conditions were considered as same. NF-2 was first described in 1822 by the Scottish surgeon, Wishart [1]. Heredity in NF-2 was first reported in 1920 by Feiling and Ward [2], In contrast to NF-1, there is paucity of cutaneous lesions, predominance of multiple CNS tumor types (especially vestibular schwannoma) and presence of posterior subcapsular cataract in NF-2.

Café-au-lait, also referred to as café-au-lait spots or caféau- lait macules are well-circumscribed, evenly pigmented macules and patches that range in size from 1 to 2 mm to greater than 20 cm in greatest diameter. While NF-1 is the most common syndrome associated with multiple café-au-lait, other syndromes associated with café-au-lait spots include McCune- Albright syndrome, Legius syndrome, Noonan syndrome and other neuro-cardio-facialcutaneous syndromes, ring chromosome syndromes, and constitutional mismatch repair deficiency syndrome. They are much less commonly found in NF-2 [3].

This patient is a 20 year old male who presented with all the classically described manifestations of NF-2 including multiple CNS tumor types, posterior subcapsular cataract, café-au-lait spots and skeletal deformity (scoliosis).

A 20 year old male born of consaingous marriage (2nd degree) having normal birth and developmental history was presented with two year history of progressive hearing loss. The loss was initially on the left, followed by the right side and was associated with imbalance while walking and an occasional ringing sound in the ear. From the last one and a half year there was progressive painless diminution of vision in both eyes (left>right) to a current state of complete blindness. His attendants noticed a change in his voice from the last eight months which became slurred with nasal intonation. The patient also described difficulty in eating food as there was problem in manipulating food bolus in the mouth and an occasional chocking sensation from last four months. 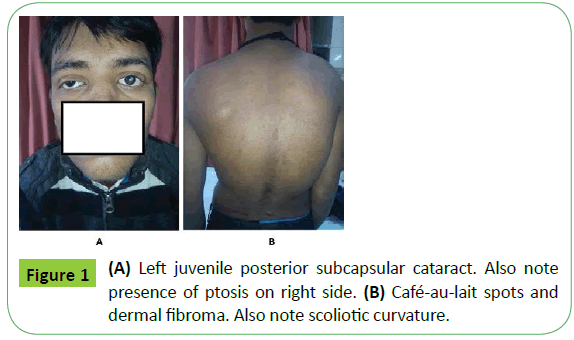 NF-2 is an autosomal dominant hereditary disease affecting 1 in 35000-50,000 people [4]. It is caused by mutation in NF-2 gene on chromosome 22 that codes for protein schwannomin or merlin [5]. Patients of NF-2 have paucity of cutaneous lesions and often have multiple types of CNS tumors (hence designated as central NF). Presence of bilateral acoustic neuroma, juvenile posterior subcapsular cataract, and other tumor types like meningioma, schwannoma, glioma or neurofibroma with positive family history is virtually diagnostic of NF-2 [6]. The term MISME syndrome (multiple inherited schwannomas, meningiomas, and ependymomas) applies to the disorder. Typical vestibular schwannoma arises from vestibular division of eighth nerve just within the internal auditory canal. As the tumor grows it occupies the angle between the cerebellum and pons. In this lateral position it is so situated that it can compress the seventh, fifth, and less often the ninth and tenth cranial nerves [7] Treatment of NF-2 requires multidisciplinary approach requiring a team of experienced neurosurgeon, otolaryngologist, audiologist, ophthalmologist, neuroradiologist, and geneticist. Small and stable asymptomatic acoustic schwannomas are followed with serial MRI scans on an annual basis. Sympatomatic tumors are treated with microsurgical resection or stereotactic radiosurgery. Surgical risk include postoperative CSF leak, facial and trigeminal neuropathy, and deafness. These risks are directly related to tumor size [8]. Bevacizumab therapy shrinks vestibular schwannomas and improves hearing in patients who have NF-2 [9]. Patients with damaged cochlear nerve can be rehabilitated successfully with a cochlear implant. Because detection of tumor at an early stage is effective in improving the clinical management of NF-2, presymptomatic genetic testing is an integral part of the management of NF-2 families.

Our patient, a 20 year old male presented with multiple CNS tumors (including bilateral acoustic neuroma, meningioma, ependymoma and multiple spinal neurofibromas) and posterior subcapsular cataract which is consistent with the diagnosis of NF-2. Although there was no family history and there were presence of multiple café-au-lait spots which are occasionally seen in NF-2. This case presents as a typical example of what has been described about NF-2.