A sequestrated Lung presenting as Lung abscess- a rare case.

INTRODUCTION: Intralobar pulmonary sequestration [ILS] is overall the most common form of Bronchopulmonary sequestration (BPS) usually occurring in the left lower lobe commonly presenting as consolidation in the lower lung lobes. METHODS: A young male [23 years] presented with hemoptysis and a large cavity with air fluid level in the left lower lung lobe for 6-7 years. Computed Tomography of chest and bronchoscopy were inconclusive and therefore he was taken up for lobectomy. RESULTS: The intraoperative finding was a sequestered lower lobe with a separate arterial supply directly from the thoracic aorta CONCLUSION: Cystic and cavitary lesions are rare presentations of ILS and are often diagnosed only during surgery. This is a rare case of pulmonary sequestration that presented to us in the form of a lung abscess.

A 23 year old normotensive non diabetic male presented to us with a 2 year history of occasional episodes of hemoptysis and complaints of generalized weakness , several episodes of cough with expectoration and low grade fever in the past 6-7 years. A complete work up included routine blood investigations, chest radiography, computerized tomography of chest and bronchoscopy.

His chest radiograph (Figure 1) showed a large cavity with air fluid level in the left lower zone. A chest radiograph done in 2009 also showed the same findings. He had been treated 3 years ago with broad spectrum antibiotics along with empirical ant tubercular drugs considering it to be a tubercular lung abscess although his sputum for negative for acid fast stain bacilli. But the abscess persisted. Computed Tomography (CT thorax) (Figures 2a and 2b) revealed fibrotic and consolidated areas with necrosis and a large abscess in left lower lobe with a small focus of consolidation in left lingular lobe. 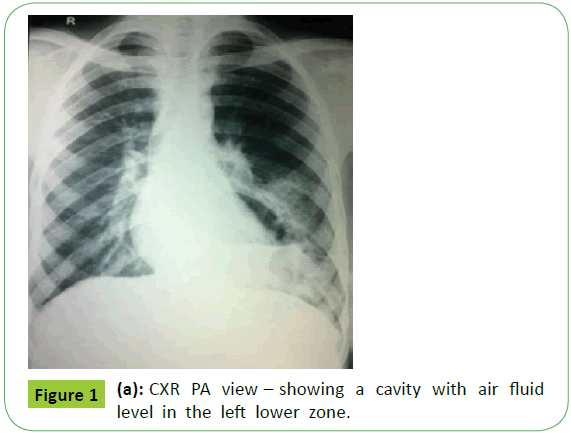 Figure 2: (a) CT scan of Chest - Fibrotic and consolidated areas with necrosis and a large abscess in left lower lobe with a small focus of consolidation in left lingular lobe. (b) Reconstructed CT scan left lateral view - a large cavity with air fluid level in the left lower zone.

On examination, he was hemodynamically stable and was afebrile. He had second grade clubbing and there were coarse crepitations over the basal part of left hemithorax on auscultation. Sputum for acid fast bacilli (AFB) was negative and culture showed no growth. Bronchoscopy revealed no end bronchial abnormality and his bronchoalveolar lavage (BAL) revealed no AFB, fungus or any other microorganism. In view of recurrent hemoptysis and persistence of thick walled cavity, he was admitted for lobectomy (left lower lobe). The intra operative finding was a sequestered lower lobe with a separate arterial supply directly from the thoracic aorta (Figures 3a and 3b). The sequestered lobe along with lingular lobe were resected and sent for histopathology. Histopathological examination revealed a mixed pattern of respiratory bronchiolitis, interstitial lung disease and desquamative interstitial pneumonia. The singular lung tissues showed chronic inflammation. The postoperative period was uneventful. His repeat chest radiograph after 3 weeks showed blunting of the left costophrenic angle with features of minimal pleural thickening. 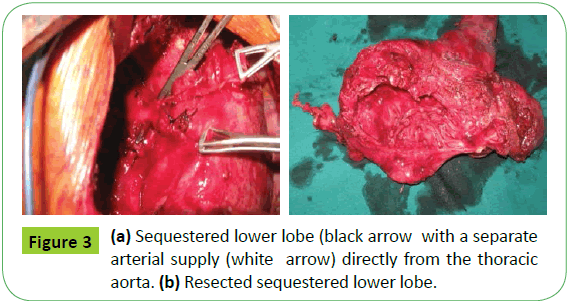 Bronchopulmonary sequestration is included amongst the rare group of congenital pulmonary anomalies. Bronchopulmonary sequestration can be described as a region of lung parenchyma that is partially or completely separated from the Bronchopulmonary tree of the lung proper. Its blood supply is usually from an aberrant artery arising from the aorta or one of its branches. It consists of abnormal nonfunctioning pulmonary tissue, including airway and alveolar elements and lacks normal communication with the tracheobronchial tree [5]. The term “sequestration” was first used in the medical literature by Pryce in 1946. Its origin is from the Latin word sequestare, which means “to separate.”

A vast majority of patients with intralobar sequestration are asymptomatic and symptoms, when present, are often nonspecific which may include chest pain, pleuritic pain, shortness of breath, and wheezing. Recurrent infection, however, is more common signs which are indicated by fever and productive cough. This risk of infection occurs despite the absence of a direct connection with the tracheobronchial tree because these sequestrations are not completely isolated from the native lung. Bacteria can invade through the alveolar pores of Kohn. Once bacteria have colonized the sequestration, frank infection can ensue because of the lack of normal bronchial drainage [10,11]. Usually the cysts are found to contain glairy mucus or in some cases pus [12].

Our reviews about patients with bronchopulmonary sequestration revealed that a diagnosis of sequestration requires a high index of suspicion. A chest radiograph may reveal a homogeneous lesion in the lung base in uncomplicated intralobular sequestration, whereas complicated sequestration may show as a cystic lesion with air-fluid levels [13,14]. But on the whole, the commonest radiological presentation is an ill-defined consolidation that is usually mistaken as non-resolving pneumonia [15]. Chest CT usually shows a discrete mass in the posterior- or medial-basal segment of the lower lobe, with or without cystic changes [15]. Cystic changes, when present, are usually multiple in nature. Colin R Cooke in 2006 reports a case where a cystic lesion [multiple cysts] in the right lower lobe was found to be a sequestered lobe. [11]

R. Prasad et al. in 2009 report a case of a 35 year old ATT non responder whose CT scan of Chest showed a cavity with fluid level localized to left lower anterobasal and posteromediobasal segments [16]. Bilal Mirza et al. reported a 2-year-old boy presenting with recurrent episodes of chest infections and respiratory distress with an intralobular pulmonary sequestration disguised as congenital lobar emphysema on the right side [17].

In 1961, B. T. Le Roux reported a series of 8 cases of intralobar pulmonary sequestration, in which 4 were polycystic; one was a single large cyst and another an 8-year-old boy admitted in 1951 with the diagnosis of either a lung abscess or a loculated empyema. Pus was obtained on thoracentesis in this 8 year old boy and thoracotomy revealed a pulmonary sequestration in the right lower lobe [12].

Again, as we browsed further through relevant articles, we learnt that lesions present in lobes other than the lower lobe should spur investigation of alternative diagnoses, as sequestration outside of the lower lobes accounts for only 5% of cases reported in the literature [18]. This makes our case more unique because of the concomitant involvement of the left lingula.

In our case, the patient had presented to us with a cavitary lesion with air fluid level in the left lower zone right from the beginning. Non response to ATT was noted. The presence of a large lung abscess with repeated episodes of hemoptysis and unremarkable findings of FOB prompted us to proceed for lobectomy

Differential for this case included bronchogenic CA, metastatic disease, lung abscess, pulmonary infarction, TB, PCP, fungal infection, Wegener’s granulomatosis and infected bronchogenic cyst. During the operation, the diagnosis of intralobar pulmonary sequestration was made on the basis of detection of a separate arterial supply from the thoracic aorta. Moreover, histopathology confirmed the presence of primitive lung tissue.

Cystic and cavitary lesions are rare presentations of ILS and are often diagnosed only during surgery. This is a rare case of pulmonary sequestration that presented to us in the form of a lung abscess.