Tuberculosis of Calvaria - A Rare Entity

Tuberculosis is endemic in developing countries like India. However, calvarial tuberculosis is very rare. It was reported first time by Reid in 1942 and only a few cases have been reported till now. Most cases occur in first two decades secondary to haematogenous spread from a primary focus elsewhere in the body that may not always be evident. Calvarial tuberculosis in middle aged male with no evidence of tuberculosis elsewhere in body is very rare. Tuberculosis of the cranium is a rare entity, and can mimic tumors or multiple myeloma. A high index of suspicion and knowledge is required for an early diagnosis. We present a rare case of tuberculosis of calvaria in a middle-aged male who responded well to anti tubercular therapy.

Tuberculosis continues to be among the greatest health problems in developing countries and has an enormous social and economic impact. During the past decade, the clinical pattern and presentation of tuberculosis has changed dramatically [1]. Since flat bones of skull contain little cancellous tissue, there is comparative rarity of the disease in skull. Tuberculosis of the flat bones of the vault of skull is rare and is considered secondary to an active or latent tuberculous lesion elsewhere in the body [2]. The first case of skull tuberculosis was described by Reid in 1842 [3]. In 1933, Strauss reviewed 220 cases of calvarial tuberculosis that had appeared in the literature and included three additional cases [4]. In 1942, Meng and Wu reported 40 cases in China of tuberculosis of the skull [5]. In 1981, Mohanty et al. reported 156 cases of chronic osteomyelitis of the skull in India, of which 22 cases were tuberculosis [6]. We are reporting a case of tuberculosis of the calvaria which is a rare entity.

A 40-year-old male presented with swelling in the left parietal region for past one and half months. It was insidious in onset and gradually increasing in size. Patient had localized pain over the swelling. There was history of intermittent fever and loss of appetite for the same duration. On examination general condition of the patient was normal. Local examination showed a well demarcated bony hard swelling in the high left parietal region with dimensions of 5 × 5 cm (Figure 1). Local temperature was normal with no tenderness or erythema. Swelling was non- pulsatile and non expansile. Laboratory investigations revealed leucocytosis with predominantly lymphocytes and raised erythrocyte sedimentation rate of 45 mm in first hour the routine chest roentgenogram (PA view) and skull were normal. However, CT scan of skull revealed well circumscribed punched out lesion (size: 37 × 46 mm) in left high parietal region with bony fragment within with overlying soft tissue swelling with likely etiology of tuberculous osteomyelitis (Figure 2). MRI of the region revealed cortical defect measuring 9 mm with periosteal elevation and sub-periosteal collection on left high parietal bone (Figure 3). The findings were suggestive of osteomyelitis. FNAC was not attempted due the bony hard nature of the swelling. 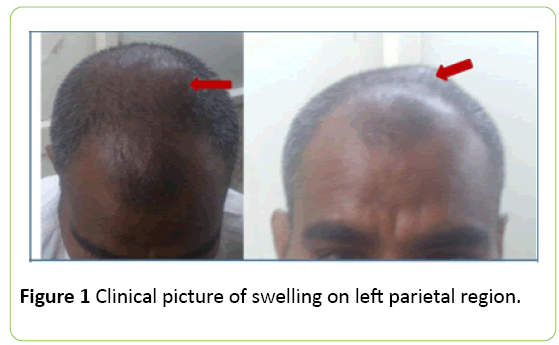 An empirical diagnosis of tuberculous osteomyelitis of skull was made as invasive procedure was required to establish confirmed diagnosis of tuberculosis. Patient was started on 4 drug daily dose anti-tubercular therapy (Isoniazid 300 mg, Rifampicin 600 mg, Pyrazinamide 1500 mg, ethambutol 1000 mg) for two months. Patients symptoms responded to the therapy and the swelling disappeared after 2 months and his appetite improved. ATT was tolerated well by the patient. Post therapy MRI revealed resolution of the lesion.

Traditionally, surgical curettage was advised as a part of treatment [3], but now anti-tuberculosis therapy alone without surgery is treatment of choice. Here in this case, we treated a case of tuberculosis of calvaria in a middle-aged male who responded well to anti tubercular therapy.