Precocious puberty is defined as the onset of secondary sexual characteristics before 9 years in males and before 8 years in females [1,2]. This is due to excessive production of sex steroids which could be due to activation of hypothalamicpituitary- gonadal axis or due to a non-hypothalamic mediated increase in sex steroid production [3]. Out of these two, central precocious puberty is more common and accounts for more than 90% in girls and about 50% in boys presenting with the disorder.

The penis had further increased in size. About the same time, he was seen to have grown taller and bigger than his classmates. The parents at this time thought the child had developed a “spiritual disease” and so they took him to a spiritualist.

However, after several months of follow up at the spiritualist shrine the child did not improve and so he was brought to the pediatric endocrine clinic at Komfo Anokye Teaching Hospital.

He was delivered at term via spontaneous vaginal delivery, birth weight 3.2 kg, height not taken, cried at birth, was healthy and normal in the neonatal period.

The mother is 28 yrs and a house wife, father is 34 yrs, and he is a business man. They are not married but cohabiting, non-consanguineous. 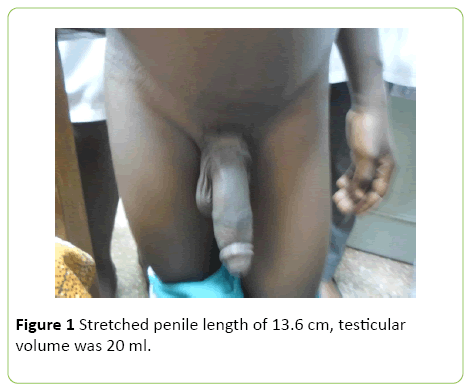 CT scan report: A large left cystic hypodensity in the left temporo-parietal region. Also, another oval cystic hypodensity in the midline causing widening of the 3rd ventricle and extends to the sella/supra sella region. Associated hypoplasia of the left temporo-occipito-parietal lobe is seen, there is associated asymmetrical dilatation of the lateral ventricles. Mid line shift to the right, 4th ventricle appears normal. 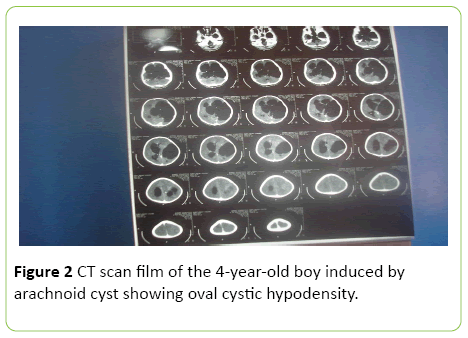 A 5-yr-old girl was referred to the pediatric endocrine clinic with abdominal mass of 2 months duration, bilateral breast enlargement 1½ months.

She was well till about 2 months prior to presentation she developed abdominal mass which was slowly enlarging. Breast was also noticed to be progressively enlarging.

She was a product of a term delivery, neonatal and post neonatal period was uneventful. She received all immunization. There has been no concern with developmental milestone till she developed above clinical features.

She has 5 other siblings who are all well and they are attending school at various grades. Parents were married, nonconsanguineous, father 45 years, an electrical welder, mother 39 years, petty trader. 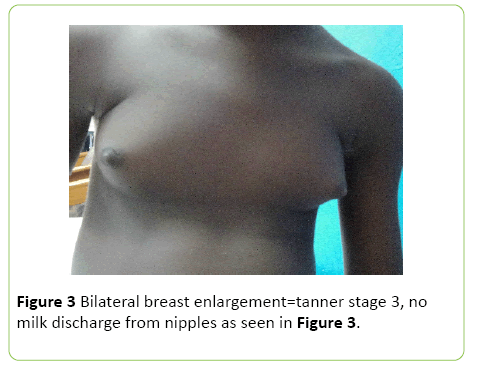 Vaginal exam: No active bleeding, no spotting, no vaginal discharge, no digital examination was done.

Histology of the ovarian mass: Granulosa cell tumour of the right ovary.

Central precocious puberty occurs as a result of the premature release of luteinizing hormone releasing hormone (LHRH) from the hypothalamus in a child. The LHRH stimulates the secretion of pituitary gonadotropins, luteinizing hormone (LH) and follicle stimulating hormone (FSH), which in turn stimulate the gonads to produce sex steroids [3,5]. The levels of LH, FSH, and LHRH stimulation help differentiate central precocity from the peripheral one. Cerebral arachnoid cysts are a rare but known cause of central precocious puberty [4,5,9]. Other central nervous system lesions resulting in sexual precocity include hypothalamic hamartomas, postencephalitic scars, tubercular and bacterial meningitis, head trauma, hydrocephalus, tuberous sclerosis, various brain tumors, meningomyelocele and primary hypothyroidism [3]. Case 1 had central precocious puberty because he presented with bilateral testicular enlargement, penile enlargement, rapid somatic and skeletal growth and increased gonadotropins. His had a bone age 12.5 years at 4 years of age, implying that he would have final short stature in adult life due to early fusion of epiphyseal growth plates [3,5]. Arachnoid cysts are intraarachnoid collections of cerebrospinal fluid (CSF) and account for 1% of all intracranial space occupying lesions [9,10]. They cause neurological dysfunction through expansion that can compress neural tissue and obstruct CSF flow [3].

In peripheral precocious puberty, secondary sex characteristics appear without maturation of gonads and there is no activation of hypothalamo-pituitary-gonadal axis. It is due to endogenous and/or autonomous secretion of sex steroids or iatrogenically due to exogenous administration of sex steroids [6,8]. Causes of peripheral precocious puberty include ovarian tumours, ovarian cysts, adrenal tumours and congenital adrenal hyperplasia [3,6,7]. McCune Albright syndrome can both stimulate the ovaries and testes to produce excessive sex steroids, without the involvement of the hypothalamus and the pituitary gland, to produce precocious puberty [3]. Case 2 had pseudo-precocious puberty due to over stimulation of the right ovary from granulosa cell tumour. Granulosa cell tumors of the ovary are relatively uncommon neoplasms, representing approximately 5% to 10% of all ovarian malignancies [3,6,7]. These tumours belong to the group of ovarian sex-cord stromal tumors. The majority of patients with these tumours are adults, but 5% are pre-or peripubertal. They are thought to arise from the granulosa cells of the ovary [8]. Granulosa cells constitute the somatic component of the ovarian follicle and function to produce sex steroids and other growth factors required for folliculogenesis and ovulation [6,8,11].

Early diagnosis and appropriate management of children with precocious puberty is important to avert associated complications due to the primary cause and to improve on the final adult height [3]. For males with central precocious puberty neuroradioimaging is mandatory [9,10]. Case 1 had cerebral CT scan that showed cerebral arachnoid cyst and hydrocephalus. Parents thought he rather had a “spiritual disease” and so they rather sought the assistance of spiritualist [12]. For nearly one year he was treated and followed up at a spiritualist center without improvement. This practice whereby people with chronic illnesses eventually seek assistance from alternative medical practitioners including spiritualists is common in Ghana. This leads to delay in diagnosis and management of otherwise treatable conditions.

All girls with precocious puberty should have abdominopelvic ultrasound examination done to look at the ovaries, the uterus and the adrenal glands [3,6]. Case 2 had right ovarian tumour which on histology was found to be granuloma cell tumour.

Case 1 had normal thyroid profile, prolactin and 17 hydroxyprogesterone whilst gonadotropins and testosterone levels were increased. Case 2 had low gonadotropins but increased estrogen levels.

Case 1 had cerebral surgery to excise the arachnoid cyst and to drain the excessive CSF and a shunt was put in. He was then put on intra muscular leuprolide acetate every three months. Case 2 had right oopherectomy and one month post operation the serum oestrogen returned to pre-pubertal level and the breast reduced to Tanner 1, as seen in Figures 4 and 5. The two patients are being followed up in the clinic. 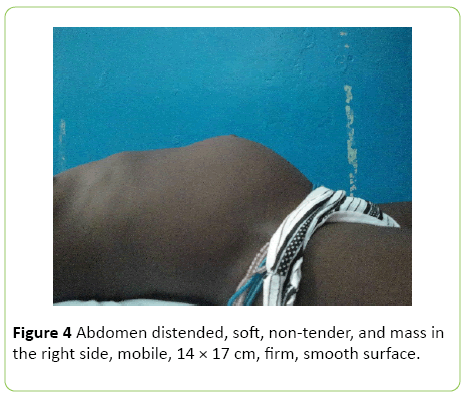 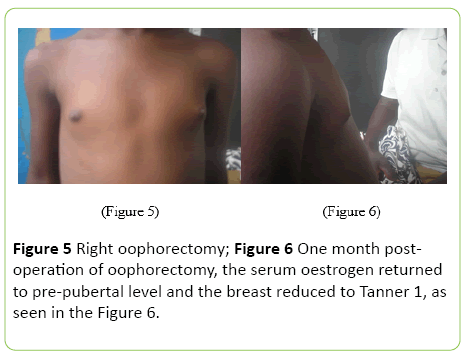 Figure 5: Right oophorectomy; Figure 6 One month postoperation of oophorectomy, the serum oestrogen returned to pre-pubertal level and the breast reduced to Tanner 1, as seen in the Figure 6.