Background: Pott's puffy tumor is a rare and serious complication of acute or chronic frontal rhinosinusitis which is the osteomyelitis of the frontal bone with associated subperiosteal abscess causing swelling and edema over the forehead and scalp. Each case has a risk of causing intracranial sequelae and death if not adequately treated.

Case report: A 21-year-old male presented with progressive swelling of his left forehead accompanied with left superior palpebral abscess and headache without any rhinosinusitis symptoms. Patients were diagnosed with Pott's puffy tumor and performed a multidisciplinary management of intravenous antibiotics and operative management with external approaches and functional endoscopic sinus surgery.

Pott's puffy tumor is a bone complication of frontal rhinosinusitis characterized as osteomyelitis with subperiosteal abscess in the frontal area due to direct spread of infection from the frontal sinus to the bone and surrounding soft tissues. It was first described by Sir Percivall Pott in 1760 as a borderless and fluctuating lesion like a tumor [1,2].

Pott's puffy tumor is very rare since the discovery of antibiotics. The exact incident is not known. The study by Ketenci et al. mentions that there are only 62 English cases reported in the last 40 years. Up to the time of this case report, no case of Pott's puffy tumor has been reported in RSSA Malang. This complication is often experienced by adolescents and young adults [2,3].

The main symptoms are headache and fever but often no symptoms of rhinosinusitis. These complications may appear alone or in conjunction with other rhinosinusitis complications [4]. The diagnosis can be use CT scan and/or MRI [5]. The maanagement is multidisciplinary, especially in cases accompanied by intracranial complications, consists of intravenous antibiotic therapy and abscess drainage by removing infected bones [4,5].

A 21-year-old man came with a headache, especially on the front with a lump on his left forehead since 3 weeks before admitted. The patient was treated by a neurologist for 10 days and received medications in the form of antibiotics (cefixime) and analgesics. The patient feels the headache is gone but the head bump extends to the center of the forehead with swelling and pain in the left eyelid. Patients are advised to an ENT specialist then referred to an ophthalmologist and get antibiotics (ceftriaxone). After 5 days, ophthalmologist performed incision with the installation of drain on the left eyelid. The patient was then consulted back into the ENT section. No ear, nose, and throat complaints were obtained. History of old cough, trauma, insect bite. Patient has smoking habits 1 pack per day since approximately 5 years ago.

From physical examination, patient's general condition is sufficient, with vital signs within normal limits. Localized status has edema in the frontal region accompanied by tenderness but no hyperemia (Figure 1). The left superior palpebra region appears to be edema and hyperemia with the drain attached. The movement of the eyes can be in all directions and the left orbital visus is within normal limits. There were no neurological disorders. 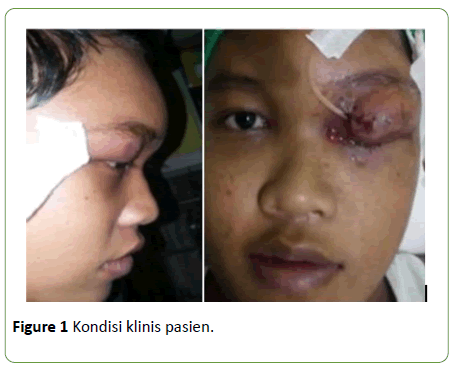 Based on nasoendoscopy examination, the mucosa of frontal reccess and the osteomeatal complex appear to be polypoid, edematous, hyperemic, and with mucopurulent secretions. Head CT Scan with axial incision show opacification in the left and right maxillary sinuses, left frontal sinus, and left ethmoid sinus. The CT scan also shows defects of the frontal bone and soft tissue swelling in the extracranial frontal region (Figure 2). We diagnosed this patient with frontal chronic rhinosinusitis with complications of Pott's puffy tumor. Patients are planned for FESS and joined surgery with the Neurosurgery department for debridement and muscle patch decortication. Patients received levofloxacin and metronidazole for antibiotics.

For debridement and muscle patch decortation, an external approach is made through a bicoronal incision. Visible lytic lesion of antrum wall of the frontal sinus with fibrotic tissue fills the sinus cavity (Figure 4). Exploration is done on the posterior wall of the frontal sinus and no osteomyelitis is obtained, followed by debridement. The cleansed frontal sinuses are covered with muscle patches taken from the right temporal fascia. Muscle patch closed with bone wax and haemostatic gelatin sponge then the installation of drain and wound incision closed layer by layer. When FESS is performed, it appears that the mass resembles a polyp filling the left media meatus, especially the superior side, not exceeding the lower limit of the inferior turbinate (Figure 5). The uncinate process appears hyperemic and edema. The masses are cleaned with Blakesley's forceps as clean as possible until the ethmoid bullaes are identified and the tissue taken is sent to the Anatomical Pathology section. Unsinectomy done with back biting forceps and maxillary sinusotomi sinistra with J curette, the rest of the tissue is cleansed with microdebrider. 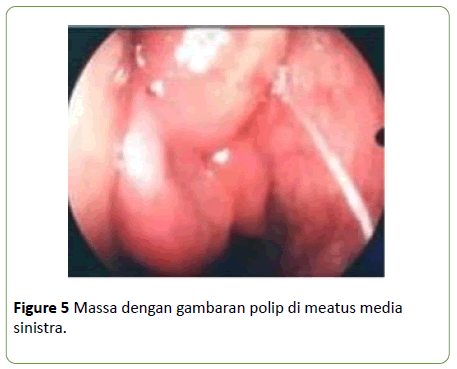 The polyps block the left frontal sinus ostium, cleansed as cleanly as possible and the tissue taken is sent to the Anatomical Pathology department and then the ager cell is cleansed and the frontal sinus ostium is extended to the anterior side with the sinus drill to the size of the ostium to be adequately assessed.

Two days post-operatively, the drain on the head is released and subjectively the patient feels the headache but can be overcome with analgesics. Vital signs are within normal limits. Minimal edema in the left superior palpebrae with visual acuity within normal limit, the frontal region appears edema with tenderness, in the left nasal cavity appear hyperemic and edema without active bleeding. Our patients were treated with clindamycin 3 × 300 mg orally, intranasal corticosteroids and isotonic nasal irrigation 2-3 times per day.

From the histopathologic examination of the mass, inflammatory polyps with dominant neutrophils was obtained. No growth of aerobic bacterial colonies from microbiological examination of the frontal and nasal sinus swabs. Virus infections or fastidious organisms cannot be excluded. Nine days post-operatively, subjectively no complaints were received. The frontal region appears edema without hyperemia. The nasal cavity appears minimal edema and hyperemia. Up to the time this case report was made the patient had regular control and no complaints subjectively. Neither hyperemia nor edema appears in the frontal region.

Frontal rhinosinusitis with complications of frontal bone osteomyelitis or Pott's puffy tumor is a very rare complication. The study by Ketenci et al. mentions that there are only 62 English-language cases reported in the last 40 years [3]. While in RSSA has never reported the incidence of Pott's puffy tumour. Chronic rhinosinusitis is a major factor causing complications in adult patients. This complication is often experienced by adolescents and young adults because of the peak development of the diploic vein [6]. Complications of rhinosinusitis are more commonly experienced by males than females because young adult males have larger diploic veins, which facilitates the spread of infection [7,8]. The patient is a male patient and the 21-year-old comes with headache, lumps on the front of the head, and swelling of the left eye.

The main symptoms are headache and fever but often no symptoms of rhinosinusitis. Under diagnosed or inadequately treated frontal or ethmoid rhinosinusitis can lead to a more serious disease process [9]. Patients present with head and lump complaints in the frontal area without symptoms of rhinosinusitis. Based on nasoendoscopic examination, the frontal recess mucosa and the osteomeatal complex area are appreas polypoid. Examination of CT scan showed a picture of sinusitis on right and left maxillary, ethmoid and frontal sinuses and at the time of operation found the mass resembles to polyps fill the meatus media showing the patient suffering chronic rhinosinusitis.

These complications may appear alone or in conjunction with other complications [4]. In addition to complaints of pain and lumps on the head, the patient also complained of swelling in the left eye followed by discharge but without the disruption of movement of the eyeball so that a palpebra abscess was diagnosed. Based on a systematic review by Nisa et al. it was said that of 93 cases of Pott's puffy tumour, 42 cases were accompanied by orbital complications and the most were preseptal cellulitis [10].

CT scan and MRI may use to determine intracranial abnormalities. CT scans may show sinusitis, bone erosion; fluid accumulation in subperiosteal, and intracranial extension. Evaluation using CT scans showed that there was worsening of the condition of the patient because of the visible lytic lesions concerning the frontal sinus to the posterior part. This may be due to an inaccurate initial diagnosis, inadequate and/or inappropriate culture of antibiotics and that Pott's puffy tumor is a condition that requires immediate operative management [11].

The main causal organisms of Pott's puffy tumor complications are Streptococcus and Staphylococcus species primarily S. viridans and S. aureus but these are generally polymicrobial infections including anaerobes and gram-negative organisms [6]. Based on the results of microbiological examination either from the frontal area or from the nose swab is not obtained growth of aerobic bacterial colonies and viral infections or fastidious organism cannot be removed. S. viridans are often facultatively anaerobic and microaerophilic organisms, so it is important to know that sometimes this type of bacteria cannot be found if there is a lack of awareness of the patient's condition or when anaerobic culture is not done [4]. Patients also on previous medical history have been getting antibiotics (cefixime and ceftriaxone). Epithelial damage causes colonization of S. aureus to secrete superantigenic toxins and has effects on various cell types including epithelial cells themselves, lymphocytes, eosinophils, fibroblasts, and mast cells. The inflammatory response to host cells is to cause T helper 2 to form localized polyclonal IgE, promote eosinophils, and mast cell degranulation as well as impaired eikosanoid metabolism. The effect of these on the local tissues is believed to form polyps [7]. Evaluation with nasoendoscopy at the time of surgery appears masses resembles to polyps filling the meatus media and from the histopathologic examination of the mass, inflammatory polyps with dominant neutrophils was obtained.

Environmental factors that play a role in the pathophysiology of chronic rhinosinusitis are exposure and smoking habits. The study by Briggs et al. showed patients with persistent smoking habits exacerbate the condition of nasoendoscopic examination [12]. Smoking is believed to damage cilia function, can increase total and specific IgE, is involved in neutrophilic inflammation, and can damage the normal flora of the nasopharynx that causes potential pathogen colonization [7]. Patients have a smoking habit of 1 pack per day since + 5 years ago.

Pott's puffy tumor can be life-threatening when there are intracranial complications such as epidural abscess, subdural empyema, and venous sinus thrombosis that can occur in 60-80% of cases [9]. Multidisciplinary therapy, especially patients with intracranial complications, consists of intravenous antibiotic therapy and abscess drainage by excluding infected bones. Selected operative therapy is external approach to sinus drainage and abscess. Current functional endoscopic sinus surgery is more commonly used because it can be used for tissue culture, reduces excessive microbial exposure, improves sinus airflow, avoids postoperative wounds, postoperative edema is minimal, and shorter hospital stay [4,5]. During treatment, the patient is given intravenous antibiotics (levofloxacin 1 × 500 mg) and performed debridement and muscle patch decortication by Neurosurgery followed with FESS. Operative therapy should be followed by administration of intravenous antibiotics appropriate for culture for 6 weeks or more. After the patient is discharged, the patient is still receiving oral antibiotic therapy for approximately 6 weeks.

Pott’s puffy tumor is a rare case. Pott’s puffy tumor need multidisciplinary therapy consists of intravenous antibiotic therapy and abscess drainage by excluding infected bones especially on patients with intracranial complications. A high index of suspicion based on the history and clinical examination is necessary to identify this rare but grave condition. Neurosurgical consult may be required in case of intracranial complications. Treatment of Pott's puffy tumor ideally requires joint management care by the neurosurgeons, otorhinolaryngologists and ophthalmologists along with intensive antibiotic treatment.